Last month’s installment reflecting on Lewis’s life over the years showcased a period of enviable production. October, while not having as high of an output, would nevertheless be equally desirable for any other author to have accomplished over the span of an entire lifetime. The debut Narnia book arrived this month, as well as his first apologetic title and the preaching of his first sermon. 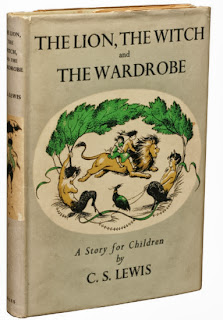 “It all began with a picture…” or that’s how Lewis once described how he came to create his Narnia stories. The world got its first taste of them on October 16, 1950 when The Lion, the Witch and the Wardrobe hit the bookstores in the UK (November 7 was the released date for the US). Instead, of attempting to say anything new about the debut story, let me share about other less known adaptations of the story: It was first dramatized for the radio in 1959 and in 1967 a live action version for the TV was produced (here’s the only surviving portion of it.)

This month is also the anniversary of Prince Caspian the second published story in the Narnia series. It came out on October 15, 1951. You may not be aware of something Dr. Devin Brown underscored in a recent podcast program about the book at NarniaCast.com. He noted (among other facts) that Lewis didn’t wait until after the first story was released to find out the public’s reaction and let that determine his next step. After having difficulty completing a story about the origin of Narnia, he hit his stride by introducing a young prince named Caspian who were featured in the three follow-up published books.

Lewis had another debut this month; on October 18, 1940 his first apologetic work was published. The Problem of Pain didn’t hit bookstores shelves in the US until three years later, but by that time Lewis was a household name in England. That’s because The Problem of Pain caught the attention of James Welch, the director of religious broadcasting at the BBC. This set the stage for being on the radio. This book previewed Lewis’s ability to tackle complex subjects without needing to use a lot of words. In the small volume about suffering he covered the question of God’s power and goodness, the fall, human wickedness, pain in humans and animals and thoughts about heaven and hell.

Speaking of radio, Lewis’s final book that covered his last radio series for the BBC came out on October 9, 1944. Beyond Personality is better known today for being the concluding book in Mere Christianity. The focus is on what most consider the dryer aspects of theology, but Lewis easily manages to make it interesting. The book contained all seven talks, plus four additional chapters.  In other radio-related events, the third BBC series from Lewis (Christian Behaviour) continued this month in 1942. He was before the microphone four times discussing Freud, sex, forgiveness and pride.  Additionally, Lewis returned to the BBC one final time on October 16, 1962 to record a talk for the radio on John Bunyan’s Pilgrim’s Progress (it aired the following month on the 11th).

On October 22, 1939, about a year before The Problem of Pain appeared in the UK Lewis preached his first sermon. It was at St Mary the Virgin (the University Church in Oxford). Today we know that message as “Learning in War-Time,” but when preached it was called “None Other Gods: Culture in War-Time.” Before becoming available in the collection of addresses in 1949 (Transposition in the UK; The Weight of Glory in the US) it was published as a pamphlet in 1939 under the title “The Christian in Danger.” That title was also used a year later when the message was included in a book called Famous English Sermons.

Returning to the topic of books, four other titles were released this month during Lewis’s life and three after his death. With the exception of a re-released version of Dymer in 1950, those published in his lifetime were on subjects more related to his professional work. A Preface to “Paradise Lost” came out on October 8, 1942 and An Experiment in Criticism was published on October 13, 1961. The other book, Arthurian Torso, was chiefly done in tribute to Charles Williams (who died in 1945). First available on October 21, 1948 it contain commentary by Lewis on Williams’s Arthurian poems, along with an unfinished prose piece by Williams called “The Figure of Arthur.”

Speaking of works released posthumously, a large collection of shorter poetry from Lewis was collected and released on October 26, 1964. It was simply entitled Poems. Then the previously mentioned Dymer was included in a collection called Narrative Poems on October 27, 1969. Finally, although released six months earlier in the U.S., Letters to Children came out in the UK on October 31, 1985.

Finally, as a regular reader of this series, you are well aware that Lewis either spoke many times and/or had several shorter works printed in various publications. The following are what happen in October over the years:

Part of a monthly series reflecting on the life of C.S. Lewis. It summarizes various events or happenings during his lifetime for the month or significant occurrences related to him after his death. A more detailed account is given at EssentialCSLewis.com.