I recently spoke with David Payne of Bird and Baby Productions. Already with such a name, you know David is a study of C.S. Lewis. As you might know, “Bird and Baby” is the affectionate name Lewis and Tolkien gave to the Eagle and Child Oxford pub where they met with other Inklings, back in the Rabbit Room. For the past 22 years and counting, David has performed as C.S. Lewis in various live productions, most notably “An Evening with C.S. Lewis” which is currently on tour.

If we measure David’s work alongside at least one other very active theatrical company that specializes in retelling aspects of Lewis’s books, alongside the well known Hollywood films (and forthcoming streaming series), alongside and the consistent recollection of Lewis works (How to Pray, How to Be a Christian, as examples), Lewis’s books are certainly alive and well attended. In fact, Lewis’s canon sells more today than ever before. All of this is certainly a testimony to the relatability of Lewis to today’s–primarily American–audience, and David Payne has stumbled into a piece of that limelight with his long-lasting stage production.

“He has an ability to articulate truth that we already know well in a way that stimulates us to think more about that truth,” David says about Lewis. “That’s a gift. Mere Christianity is certainly a classic example. In many ways it’s a layman’s approach to Christianity. It doesn’t get bogged down with theological terms but presents the basic truth itself.” 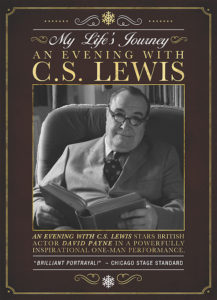 David didn’t grow up wishing to act. The profession seems to have found him. “It started off when a theatre company in Nashville put out a bulletin about their upcoming production of ‘Shadowlands’,” he says. “The ad said, ‘British accents help.’ It sparked my interest because I have a British accent,” he says with a laugh, having grown up in England and only taking up residence in Nashville in 1992. “I had the accent for a long time. So I called and said, ‘Look, I haven’t been on stage before. Is there any point in me coming down? I do have a British accent.’ They said, ‘It’s like community theater so all newcomers are welcome.’ I went down and thought I might get a small role and ended up with the lead role of C.S. Lewis. That’s where it all started.”

David, who made a profession of faith in Jesus long before the curiosity with Lewis, fell deeply into the well of Lewis’s writings. He’d be the first to admit that he’s not a scholar, but rather an actor. “I know quite a bit about Lewis and I can hold my own,” he says, “but if you ask me to go up against five scholars of C.S. Lewis, I’d wave a white flag.”

He was given a copy A Grief Observed by the director of the Shadowlands play because it presented Lewis in his struggle with grief following the death of his wife. David went on to memorize all 96 pages. “It took me three months,” he says, “but I thought afterward that the book needed an audience.” With the help of a connected Nashville friend, he performed excerpts from the book to a group of about 40 people. “It went down rather well. That’s when I contacted the C.S. Lewis folks and said I’d like to do a one-man show. That was passed on to Douglas Gresham.”

As God’s good providence would have it, David had already met Gresham via phone. “After rehearsals for ‘Shadowland’ were over and before we were going to open, I had to go back to England. A friend of mine called me and said, ‘A little birdie has told me that you’re doing the show in Nashville. Well, I know someone who’s supposed to be an expert on Lewis. Would you like to talk to him?’ I said, ‘Yes, it can’t hurt, can it? What’s his name?’ My friend said, ‘I think his name is Gresham.’ It was Douglas Gresham! He got me his phone number and I phoned him… and he answered. As the conversation progressed, I asked what he was doing on the day we had our gala performance in aid of St. Jude’s Children’s Hospital.   He was free so we brought him and his wife over to be our special guest for that performance.

David got permission to present a one-man play drawing the text from A Grief Observed.   After about two-years, David felt the play was too hard-hitting for some because the first half of the book is very dark as Lewis struggles with his grief and the effect on his faith.  The second half is very redemptive but, even so, some people left after the first act.  But one thing did lead to another. “After the performances,” he says, “people came up to me and asked about Lewis, as if I were a scholar. Over time I got the idea that it’d be interesting if Lewis answered those questions himself in sort of a fireside chat.”

And that’s how ‘An Evening with C.S. Lewis’ came about. David worked through Surprised by Joy, his collected letters, biographies, and anecdotal things he found out about Lewis to build out the experience that people see today. “I was looking not so much at the writer and the contents of his writing,” David says, “but the man and the contents of who he was as a person.”

The audience seems to find a home with the production.  Many have a similar response wherever David plays Lewis – “I feel as though I’ve been with C.S. Lewis!” It’s a reaction that reflects the play is achieving David’s objective.  “There’s a lot of humor in the play,” David says. “Lewis was a humorist, so people laugh a lot. They are surprised at how much they laugh. And there’s nothing finer for an actor than having people enjoy themselves with so much laughter. There’s also the aspect that he talks about his wife and he talks about her death, and sometimes I can hear people sniffling.”

It’s this real, heartfelt reaction that speaks to David as an actor, and is a testimony to C.S. Lewis. Lewis wrote for an audience. His letters alone give proof to his desire to reach beyond his home in Oxford and help others unravel the truths and complexities of faith and faithful living. But there are other ways he cast off his donship, including his BBC radio presentations, writing fiction for children, and valuing his relationship with Jesus far above the academic stuffiness that could easily engulf anyone. David’s work is very much an extension of this jovial literary giant, and it’s with great hope that new audiences will find Lewis afresh, and in so doing, might discover their need for Jesus.

If you are interested in seeing “An Evening with C.S. Lewis,” I encourage you to find upcoming dates on his website.