Love is often overused and undervalued. We love everything from foods to cars, from movies to retailers, from people to God himself. We may not consciously distinguish one use of love from another, in part because our speech is becoming more and more informal and reduced every year, but it’s important to be intentional about the differences. As we know, Scripture tells us that love is the highest attribute. 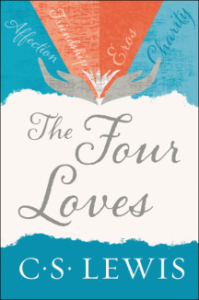 When we want to know more about love, I’ve found C.S. Lewis’s book The Four Loves a helpful guide. Here’s a synopsis of Lewis’s thoughts, published in 1960 and based on a radio series he did with the BBC a few years previous.

First, Lewis addresses our relationship to God as need-love. Yes, we give our bodies as living sacrifices so to be found holy and acceptable. Paul says that this is our reasonable service (Romans 12:1). But our gift means nothing. We are in total need of God and his love, grace, and redemption. “Man approaches God most nearly when he is in one sense least like God,” Lewis says. “For what can be more unlike than fullness and need, sovereignty and humility, righteousness and penitence, limitless power and a cry for help?”

Affection (storge)
Affection covers an array of loves. Like animals, the care of mother to babe is a picture of affection. It relies on the expected and the familiar. Lewis describes it as humble. “Affection almost slinks or seeps through our lives,” he says. “It lives with humble, un-dress, private things; soft slippers, old clothes, old jokes, the thump of a sleepy dog’s tail on the kitchen floor, the sound of a sewing-machine…” Affection can sit alongside other loves and often does. For example, when a man and woman fall in love it is often because of certain affections – a particular location, experience, personality, interest – that begin to wrap around the couple so to make love an expected and familiar part of their shared lives. It’s the familiarity of,  “the people with whom you are thrown together in the family, the college, the mess, the ship, the religious house,” says Lewis. The affection for the people always around us, in the normal day-to-day of life, is the majority of the love we experience, even if we don’t label it.

Friendship (philia)
Friendship is the love dismissed. “To the Ancients, Friendship seemed the happiest and most fully human of all loves,” says Lewis, “the crown of life and the school of virtue. The modern world, in comparison, ignores it.” Why? Perhaps we know it’s the most time consuming, the least celebrated, the one we could live without. Perhaps too, as Lewis says, “few value it because few experience it.” Romance lends itself to conception, affection enables us to have a sense of place and belonging, and charity provides a track to redemption. But friendship doesn’t provide the same level of productivity, if we want to state it in a consumer mindset. However, Lewis thinks friendship likely has closest resemblance to Heaven where we will be intertwined in our relationships. We develop a kinship over something in common and that longing for camaraderie makes friendship all the more wanted. “Friendship must be about something,” Lewis says, “even if it were only an enthusiasm for dominoes or white mice. Those who have nothing can share nothing; those who are going nowhere can have no fellow-travellers.” Think about it too. Friendships have begun faith movements, developed entire areas of thought, and contributed to many projects from art to business.

Romantic (eros)
Different than friendship, lovers, “are always talking to one another about their love” and “are normally face to face, absorbed in each other,” says Lewis. The danger in romantic love is to follow blindly after a feeling of passion. Then,  we celebrate the passion and think its absence means such love has died. Certainly, true romance is not so fickle. Though the feeling is useful. “The event of falling in love is of such a nature that we are right to reject as intolerable the idea that it should be transitory,” says Lewis. “In one high bound it has overleaped the massive wall of our selfhood; it has made appetite itself altruistic, tossed personal happiness aside as a triviality and planted the interests of another in the centre of our being. Spontaneously and without effort we have fulfilled the law (towards one person) by loving our neighbour as ourselves. It is an image, a foretaste, of what we must become to all if Love Himself rules in us without a rival.” There’s a reason Scripture teaches this bond of man and woman, from Genesis onward, is the picture of God’s love for the world, Christ for his bride, the church. When we discover afresh that romance is more deeply set than the drivel served up by our culture, than we will more rightly hold our spouse in the model of unconditional love.

Charity (agape)
This is our chief aim, the unconditional love of the Father given to us through his Son. Affection, friendship and romantic love are each the training ground for charity to grow. It’s also a rival to the three. Lewis mentions St. Augustine’s deep loss of a friend who says that such desolation is what occurs when we give our heart to anything but God. “All human beings pass away,” says Lewis. “Don’t put your goods in a leaky vessel. Don’t spend too much on a house you may be turned out of.” Yet, we are made to love and we are in want of it. If we play it safe, we are not living out the Gospel, but burying the coin in the safe ground, as the parable says. Lewis reminds us:

There is no safe investment. To love at all is to be vulnerable. Love anything, and your heart will certainly be wrung and possibly be broken. If you want to make sure of keeping it intact, you must give your heart to no one, not even to an animal. Wrap it carefully round with hobbies and little luxuries; avoid all entanglements; lock it up safe in the casket or coffin of your selfishness. But in that casket—safe, dark, motionless, airless—it will change. It will not be broken; it will become unbreakable, impenetrable, irredeemable. The alternative to tragedy, or at least to the risk of tragedy, is damnation. The only place outside Heaven where you can be perfectly safe from all the dangers and perturbations of love is Hell.

If we think that perhaps love is not worth the sorrow and pain, than we are more pagan than Christian. Though the fall has invited such selfishness to linger heavy in our culture, ours is the Gospel charge – to go to the nth degree to love those who are broken, not for some vague humanitarian effort, but to make disciples of all nations, “baptizing them in the name of the Father and of the Son and of the Holy Spirit, and teaching them to obey everything I have commanded you” (Matthew 28:19-20).

Let us ask God to awaken such a abandoned and reckless love to come alive in us.